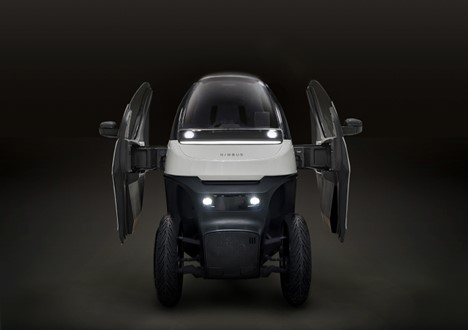 Happy Thursday.  Our Colorado team has been seeing more and more Rivian R1T’s on the road, including at a car show last weekend.  Pretty amazing to see more and more hit the road.  Our newsletter this week has highlights on Solid-State Batteries, Ford, Tesla, Chick-fil-A, and much more. Enjoy the newsletter and don’t forget to share.

Have a great rest of your day.

Camping season is here. Okay, okay, the Cybertruck isn’t out yet, but that didn’t stop Space Campers from dreaming up a camping solution for the Cybertruck.   For $24,000, owners can transform their Cybertruck into a camper van by adding a wedge-like camper modification to lay on top of the vehicle. The camper can house a double bed and features a solar roof, interior lighting, four electrical outlets, and much, much more. This is my kind of camping.

Need something to get around your city, but tired of the rain ruining your e-bike commute? Nimbus has a solution with the One, the ultra-tiny EV that’s like a motorbike, but with a roof.  The EV will cost around $9,980, but Nimbus will also offer a subscription service for $200/month. Nimbus expects to start delivering to customers in Q3 2023. I can see myself cruising the streets of Rome in my One and that’s why the Nimbus One is the EV of the Week.  – John @ Mobility Evo

I wish I lived in Austin. Chick-fil-a is testing autonomous delivery vehicles with Refraction AI in the city. The partnership will have a fleet of AVs downtown that will deliver within a mile of two of their restaurants. After the initial tests, the plans are to expand within Austin, starting later this month. If you live in Austin, check this out and let us know about your experience.